Septic tanks are watertight and waterproof prefabricated equipment, enabling the sedimentation and removal of suspended solids from toilets, washbasins, kitchens, etc. and transformation them in odorless and harmless mineral compounds. This is done through a decantation and solubilization by the action of anaerobic bacteria (digesters).

To limit the discharge of solids in the effluent from septic tank, it´s common to use tanks with two compartments. Sometimes septic tank has three compartments, using the third as a fat separator.

The water enters in the first chamber, inside of this occur the decanting and the sedimentation, as well as the decrease of the speed of entry of the wastewater. The heavier material is deposited at the bottom of the tank and the lighter material (fat, etc.) rises to the surface, giving rise to a layer of foams formed by the accumulation of floating matter.

Then the water passes to the second compartment through holes located in the middle part, where occurs the same process than in the first compartment but in a much smaller amount. The second chamber provides secondary sedimentation, digestion, decomposition and storage of sludge produced in the previous chamber. The water evacuated to the outside is collected from the intermediate part.

Inside of two compartments an anaerobic fermentation is produced which results in digestion of organic matter. Anaerobic bacterias metabolize organic matter gasifying it, hydrolysing it and mineralizing it.

The organic matter retained in the lower part of the tank suffers an anaerobic and facultative decomposition process and turns into gases: carbon dioxide (CO2), methane (CH4), hydrogen sulfide (H2S). 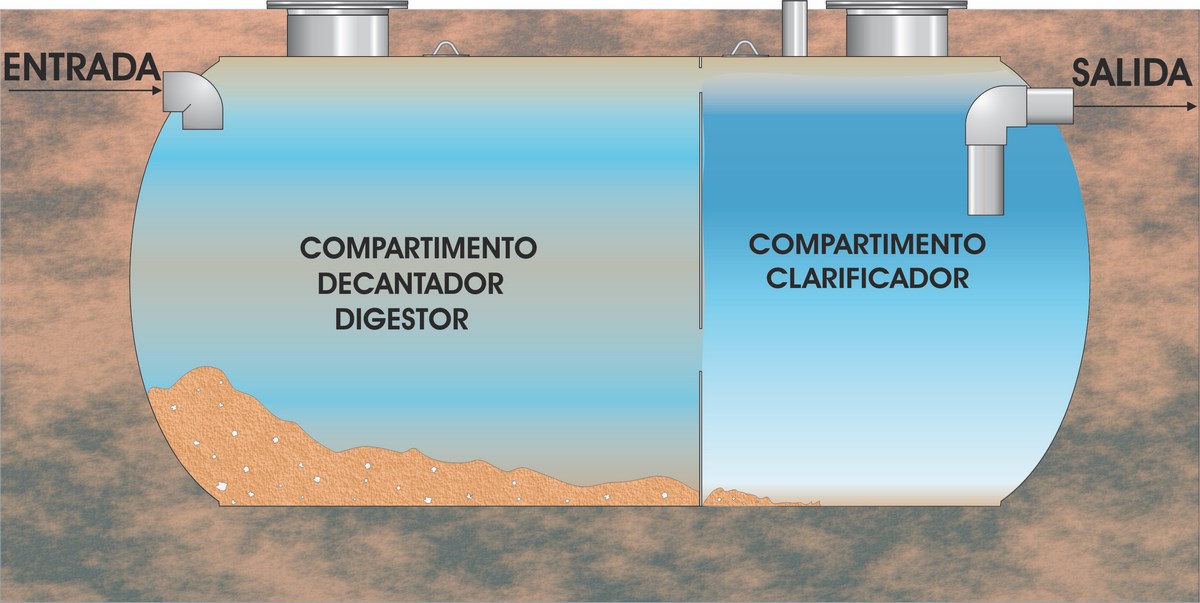 In spite of the fact septic tanks generate hydrogen sulphide, there are no odors because the SH2 is combined with the metals present in the sedimented solids resulting in the formation of insoluble metal sulphides. If odors are produced is a symptom of it has lost the biological balance of the biomass that works in it for the benefit of acidophilus bacterium that produce excessive suphurs of hydrogen and prevent the natural degradation and in that case, it is necessary to apply a biological activator because at these conditions the tank does not work and the organic matter accumulates, but they do not turn into gases, with the consequent fast filling and loss of drainage when all the solids go to the filtering zone, producing a crust and preventing the drainage and the filtration of liquids to the ground.
Although the anaerobic and facultative decomposition, permanently reduces the volume of solid matter accumulated in the bottom of the tank, there is always a net accumulation of sludge that should be maintained as long as it does not reduce the volumetric capacity excessively, since these sludges are going to have a very high biological activity will reduce the load and degrade the solids.

The system is recommended for installations where it is not required a large amount of discharge.

An annual emptying will be carried out in the two compartments, in its 3/4 parts, filling the water tank again.

The conduction of aeration must have a minimal height of 3 meters, for the correct extraction of gases and smells generated in the process of decomposition.

This website uses cookies to improve your experience while you navigate through the website. Out of these, the cookies that are categorized as necessary are stored on your browser as they are essential for the working of basic functionalities of the website. We also use third-party cookies that help us analyze and understand how you use this website. These cookies will be stored in your browser only with your consent. You also have the option to opt-out of these cookies. But opting out of some of these cookies may affect your browsing experience.
SAVE & ACCEPT
Powered by